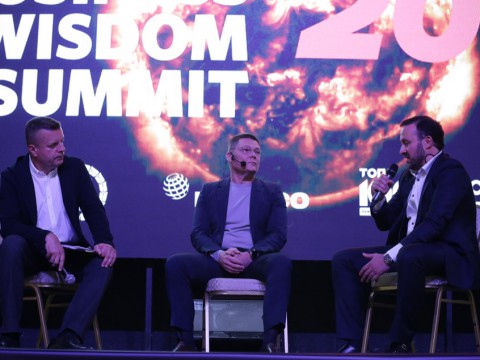 Business Wisdom Summit (BWS) is an event for top executives and business owners held in Kyiv annually since 2012.
Top managers and business owners made their speeches at the event, sharing their experiences, personal and professional discoveries, vision of promising directions for business development and growth. The Business Wisdom Summit is traditionally held for two days. The first day - Owner Day - is dedicated to the speeches of business owners. The second - CEO Day - is dedicated to the top executives of major companies.

The format of the summit involves not only the speeches of the experts, but also active panel discussions on the innovations of the future.
The summit was attended by: Leonid Parfyonov - a five-time TEFI winner, journalist and author of ‘Namedni’ (Recently); Serhiy Taruta - politician, head of the board of directors of Donbass Industrial Union; Igor Mazepa - a founder and head of ‘Concorde capital’; Vitaliy Antonov - a founder of ‘OKKO Group’; Anna Derevyanko - an Executive Director of the ‘European Business Association’; Gennady Chizhikov - President of the Chamber of Commerce and Industry of Ukraine; Igor Lisky - a Head of the Board of Directors of ‘Effective Investment’ company and many others.
Volodymyr Pirus with Leonid Parfyonov and Konstantin Parshin have made a speech about the role of public-private partnership in the world and its opportunities for Ukraine, including the development of artistic infrastructure ...
5 key points of the discussion:
- The first problem is that the country always has limited resources, which will never be enough to implement large-scale programs. There were no new bridges emerged during the 30-year period of independent Ukraine, because of lack of money and motivation to make a decision.
- The second problem is that the election cycles in our country are too short for long programs that can take 10-20 years. Every new political power that comes to the authority wants to see their interest, their share in programs or just decides that the program is not useful anymore.
-The main risk in business is that programs for 10-20 years can be stopped or underfunded due to misunderstanding of project results within one election cycle (which means they are of no interest to the government)
- We see the PPP as the solution to these problems - a tool to protect the interests of all parties involved in global projects and programs, which can be: country, business (national / international), government of our country and other countries, superstate structures (foundations, programs such as the Paris Climate Agreement, the Kyoto Protocol).
-One of the priorities is to enable the business to speak about its interests with the government.
- It is not necessary to think of urgent tasks, but of important ones - this is the basis of modern business. And then political forces will be involved in the process. As for the urgent tasks there must be responsible management.
- There are real world examples of programs being implemented through the PPP - a US security system that created programs where hospitals remain state-owned but doctors and all staff working there - works as individuals and entrepreneurs, not as hired staff.
- Another example of the PPP is France. It is the dismantling of hydroelectric power stations and the drainage of water from reservoirs to clean the river bed and restore the environmental situation across the country, which opens up a lot of new opportunities.
- We believe that in Ukraine, private entrepreneurs should also be involved in cooperation with state authorities in order to develop economic and social spheres.
- The next solution is to change the scale of planning. They must increase multiply. Now we think of homes, neighborhoods, and we must think of the cities and place of each city in the overall scheme of spatial development. Spatial development means a system of world cities, where each city is an important element of the network and has its role.
- For example: Barcelona - a tourist center; Berlin is an industrial center; London is a financial and legal world hub where law is an object of trade. Only by thinking larger categories of planning you can create new niches, industries and perspectives, both for the state and for business. By concentrating business efforts around this type of relationship (PPP), we strengthen the place of business itself in the system of ‘business-state-society’ relations, create a positive attitude to business, thus, again, increasing its value.