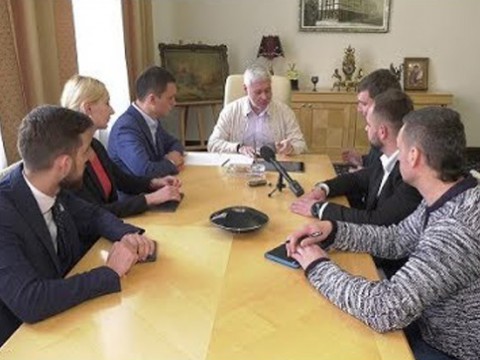 The City Development Fund presented the Unified Electronic System at the Kharkiv City Council during a meeting with the first deputy mayor of Kharkiv, Igor Terekhov. This system will allow the mayor to track the work of housing and communal services, the timing and plans of these works, and the speed of response to requests from Kharkiv residents.
“Thanks to the Unified Electronic System, it will be possible to monitor directly from the office how any work is being carried out in the city. If the Department or the utility does not perform a number of applications, or deviates from the norm, it will be displayed in the System, everything can be checked and the responsible manager asked for the reasons of delays or non-compliance, thus revealing the essence of the problem, and solving all problems on the way to improvement the quality of life of the townspeople,” said Vladislav Shaleny, a technical specialist of the City Development Fund.
In addition, the System has access not only to housing and communal services, but also to the social, medical and educational spheres. It should be noted that such an electronic program is already operating in Kyiv, so there are no obstacles to launch it in other cities, including Kharkiv. In addition, as noted by Vladislav Shaleny, the infrastructure in Kharkіv is similar to the capital’s, which makes it easier to configure it for this city.
Local authorities have appreciated the innovation and plan to introduce it in Kharkiv in the near future. In particular, the first deputy mayor of Kharkiv Igor Terekhov said: “This is a serious project, of course, it is necessary for the city and for improving the quality of services provided to the residents of the city. However, it will take some time for the full implementation of the system, because it is absolutely necessary to introduce into the System all the elements that include the housing and communal and social spheres of Kharkiv.”